Living in Kazan you can open your door to numerous social, cultural and tourist activities.

Kazan is the capital of the Republic of Tatarstan and one of the largest economic, scientific and cultural centers in Russia. With a population of about 1.2 million, it is the eighth most populous city in Russia. Kazan lies at the confluence of the Volga and Kazanka Rivers in European Russia. Kazan is located 800 km far from Moscow. Our city celebrated its millennium in 2005. In April 2009 Kazan was granted the right to brand itself as the "Third Capital" of Russia.

The city has a citadel of the 16th century ‘Kazan Kremlin’ which was declared a UNESCO World Heritage Site in 2000. It is the heart of the ancient city, a unique complex of archeological, historical and architectural monuments that embodies the culture of the west and the east. Here you can see the minarets of the city's main mosque of Kul Sharif and the sparkling golden domes of the oldest Orthodox Annunciation Cathedral. On the territory there is one of the symbols of Kazan - the famous "leaning" Syuyumbike tower.

Kazan easily combines the culture and traditions of the East and the West. A prevailing feature of life in the city is peaceful, creative coexistence of more than 100 different religions and nationalities. Tatars are the second-largest ethnic group in Kazan and the largest ethnic group in the Republic of Tatarstan. The multi-ethnic city is honored by UNESCO and famous for Muslims and Christians living side-by-side in peace.

Kazan is one of the largest industrial and financial centers of Russia, and a leading city of the Volga economic region in construction and accumulated investment. An innovative economy is represented by the largest IT-park in Russia which is one of the largest of its kind among Eastern Europe science parks. Currently there are more than a hundred enterprises with foreign investments registered in the city. Major international conferences, including the annual assembly of the European Bank for Reconstruction and Development (EBRD) and the Congress of World Heritage Cities organizations are arranged in Kazan on a continuous basis.

Kazan has traditionally been one of top science cities in Russia. There are about 40 universities operating in the city. There are also reasons to call the thousand-year-old Kazan a ‘young’ city, as it is the largest student city of Russia. There are nearly 200,000 students from 67 countries studying in Kazan. Such famous scientists as N.Lobachevsky, A.Arbuzov, E.Zavoisky, A.Butlerov, V.Bekhterev lived and worked in Kazan.

There are lots of museums, libraries, art galleries, concert halls, theaters in our city. Two renowned international festivals: the opera festival named after Fyodor Shalyapin and the classical ballet festival named after Rudolph Nuriev have been regularly held for many years in the Opera and Ballet Theater named after M. Jalil. The Sergey Rakhmaninov White Lilac International Festival, the Kazan Autumn International Open Air Opera Festival, the Concordia Modern Music Festival, the Aksenov Literature Festival and the Golden Minbar International Festival of Muslim Cinema have already become annual staples for Kazan’s cultural life. Apart from the local museum there is "Ermitazh-Kazan" Center located in Kazan, which is the only branch of the famous museum in Russia. In our city such famous personalities as V.Lenin, L.Tolstoy, V.Aksenov lived.

Kazan is also a driving force for Russian sports development and is a home for many International athletes and sports clubs competing around the world. In 2009 it was chosen as the "Sports capital of Russia" and it still is referred to as such. The city hosted the 2013 Summer Universiade, 2014 World Fencing Championship, the XVI FINA World Championship 2015, and 2018 FIFA World Cup and World Skills 2019. There is one of the Russian largest new football stadiums "Ak Bars Arena/Kazan-Arena" for 45,000 spectators, there is one of the few in the country rowing canals and a number of unique facilities for some sports. 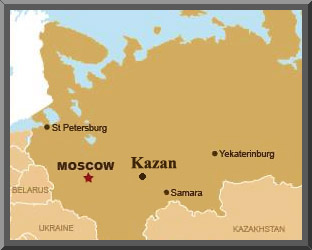 Kazan is a major transportation center. There are 2 railway and bus stations, a river port and an international airport. Kazan International Airport is located 26 kilometers (16 mi) from the city center. A single-line Kazan Metro opened in 2005. At present the Kazan Metro has 11 stations but it will be surely extended. The developed city transport facilities make pleasant and easy your visits in and around the city. Excellent road, rail and air services provide fast and efficient travel throughout the Russian Federation. For example, to reach Moscow it takes you 10-12 hours by train, by car or by bus and only 1,30 hour by airplane.

Kazan has an active international activity. In the city there are several foreign consulates and other diplomatic, trade, and humanitarian missions. The city is a member of several international organizations of capitals and cities; it has partnerships with more than three dozen of foreign cities. Kazan hosts various international Summits and other important forums, conferences and events of world level.

Even if Kazan is the "Third Capital" of Russia, the average cost of living in Kazan is lower than in Moscow or St.Petersburg.

You can learn more about our city here: